This fall, German studies scholars from around the world gathered at the Pyle Center in Madison for the 52nd Annual Wisconsin Workshop Dis/Continuities: German Studies and Beyond. This year’s conference honored Professor Emeritus Marc Silberman. Professor Silberman, a former director of the CGES, published widely on German literature, film, theater, and culture and taught at UW-Madison for 28 years following over a decade of service at the University of Texas in San Antonio. 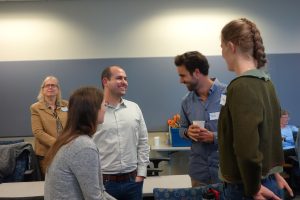 The conference included five roundtables, in English and German, on various topics. Day one commenced with a roundtable on memory studies—focusing on current debates on the Buchenwald concentration camp, the role contemporary museums play in a field between history and activism in Germany and beyond, protest movements, and the interaction of memory studies and video games. The next roundtable centered on contemporary theater and performance with lectures about Galileo, the continued significance of Brecht for performance studies, and current tendencies in contemporary theater. Professor Dr. Naika Foroutan from Humboldt University in Berlin closed the first day of the conference with a keynote address titled “(P)Ost-Migrantische Analogien? A Triple German Entanglement and its Consequences for Understanding the New Germany.” Foroutan is a major voice in Germany working on migration studies, also advising the German government. In this talk, she discussed the degree to which the situation of migrants into Germany can be compared to the ongoing issues East Germans face after more than 30 years of German unification. 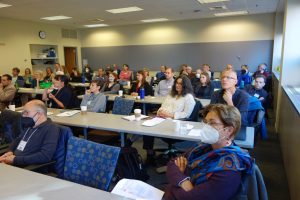 A roundtable on East German cinema and the emergence of GDR culture on the big screen launched day two of the conference, while the next roundtable explored the performance of migration, specifically in photography and poetry. Following greetings to Marc Silberman from colleagues around the world who could not travel to Madison for the conference, the final roundtable, which featured virtual speakers from Oxford University, Bremen University, University of Minnesota—Graz (Austria), and University of Hawaii, focused on the significance of Brechtian theater transnationally.  The workshop closed with a public reading by award-winning German author Tanja Dückers, the Distinguished Max Kade Writer in Residence in the department of German, Nordic, and Slavic+ this fall, followed by closing remarks by CGES director Sonja Klocke, Professor of German, Professor of German Sabine Gross, and Professor Emeritus Marc Silberman.