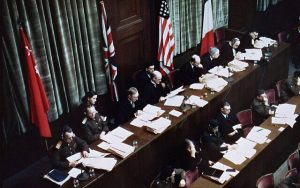 An article titled, “Ukraine and Russia Are Both Looking to the Nuremberg Trials-But Finding Different Lessons in the History” written by UW-Madison Historian, Francine Hirsch, in May 2022, in the Times Magazine talks about the meaning of the Nuremberg Trials. The article focuses on the history of the trials after World War II and what this meant for those being tried and the victors of the war. It explains how Ukraine is looking towards the trials to demand an investigation into Russian war crimes and on the flip side how Russian leaders invoked it to justify their invasion of Ukraine.

The Nuremberg Trials, to Ukraine, represent hope and the possibility of bringing Russia’s leaders to justice for waging an illegal war of aggression. The article goes into depth on how Ukrainian courts can try Russian soldiers for war crimes, but cannot try Russian leaders for launching an aggressive war. It also focuses on the symbolic significance on how some of the places terrorized by Nazi occupiers are again the site of devastation.

On the other hand, Putin is invoking the Nuremberg to rally Russians for war against Ukraine and justified the invasion with the ideas of “de-Nazification.” The article explains how this mindset shows the narrative that the Russians are the saviors of Europe since the country wasn’t held responsible for any crimes against humanity in World War II. It’s a way for Putin to manipulate the past in the way that Soviet crimes weren’t judged because they never happened.

More information from the specific article can be found by clicking on this link.