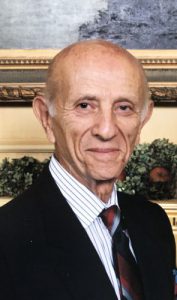 MIDDLETON, WI – Sol Bloomenkranz, age 93, passed away unexpectedly at home on July 7, 2017. He was born in Chicago, IL to Max and Frieda Bloomenkranz on December 4, 1923. As a teenager, Sol traveled to Poland to visit his relatives which inspired him to study and work internationally. During World War II Sol interrupted his studies at Northwestern University to enlist and serve in the US Army. After the War he completed his studies and moved to Zurich, Switzerland to attend graduate school.

Sol went on to work for the United States Government in Frankfurt, Germany where he met the love of his life, Gisela Maria Imm. They married in 1956. Sol switched careers in 1961 and entered the advertising industry. He continued to pursue his passion for international business at agencies in Germany, Italy, Belgium, France and Spain until his retirement in 1988. Sol and Gisela then moved to the United States to be closer to their children and grandchildren. They lived in Boca Raton, FL and later in Middleton, WI.

Sol was preceded in death by his parents, his wife Gisela, and his brother Bernard Bloomenkranz. He is survived by his sons Larry Bloomenkranz (Lisa) of Cleveland, OH, and Dick Bloomenkranz (Laura) of Madison, WI; and grandchildren Martin, Miles, Bill and Tina. He also leaves behind his sister-in-law Eunice Bloomenkranz of Skokie, IL and many nieces, nephews and their families.

In lieu of flowers, donations may be made in Sol’s honor to the Gisela Imm Bloomenkranz Fund. For mailing a gift, please note the name of the fund and account #132500000 on your check and send to:

Alternatively, you may give online. Please go to the University of Wisconsin’s Foundation secure website, https://supportuw.org/give/